Check out my review on the Sharp 55N7000U 4K HDR Enabled Television:

I bought this at a local electronics store (but it was a large chain; BB). This television was on sale for less than the MSRP so I walked home with it for less than $750 including tax. I wanted to buy this from Amazon but evidently it’s extremely new and was just released. There are a lot of features and the picture is beautiful!

I was looking to buy a 55″ LG HDR tv or a 50″ Samsung (expensive) but this picture quality was on par with the Sammy and way better than the LG. The LG I read, technically has the ability to show 4K but because of the RGBW pixel setup, it is not actual resolution. This is RGB which can display the naitive resolution 4K but it is an 8 Bit panel from what I am reading.

This does have HDR (HDR 10) but because it is 8 Bit, this difference will not be as great as when it is a 10 bit panel. The Sammy and LG are 8 bit as well from the stats I read (hard to find at the moment).

Additionally, the “Premium HDR” from LG and Samsung on their budget models are not great but they do support the most popular standard at the moment. Just so you know, Dolby Vision is the other and beautiful but you have to buy at least the Vizio P series to get that. Also, 99% of the time a TV will not get a software update to get Dolby Vision as it is licensed and requires a chip from what I read.

Nonetheless, when I compared the three sets I mentioned earlier, I noticed this set was way better than the LG and as good as the Samsung so I went with this one.

The picture included is of low quality SD from streaming and it is up scaled. This does up scaling very well and that is extremely important in my opinion as there is not a ton of 4K material and HDR yet and if you want it, you need about 30Mbps download speeds (which rules me out as I can only get DSL). HDR adds another 3Mbps required with 4K.

Onto the features and look:
It has HDR
Great up scaling
Screen cast
Roku-like remote
Snappy, fast User Interface
Good apps with the ability to add some more (not a ton yet but it is very new)
Opera Internet Browser
3 USB ports (with one being a 3.0)
4 HDMI (2 USB 2.0 for 4K at 60hz and 2 1.4 for 4K at 30hz)
Headphone/speaker out
OTA Tuner
Component input (HD up to 1080i)
Awesome sound for flatscreen
Some games
1 ARC HDMI
1 MHL HDMI
Only 48.8 inches wide (my old Vizio was 51″)
Inexpensive
Full LED backlight array (not sure how to prove or confirm) but multiple stats and reviews say so and it looks great
AWESOME wifi! No drops so far and ac/dual band

Some cons are:
No Hulu
Screen cast seems to be Android only but I’m not 100% sure
No 3D (if that is a con)
HDR is confusing or not clearly outlined but there
8 Bit panel

Sharp is now owned by Hisense and they are definitely getting aggressive in the US market. I’ve read that they are still using Sharp panels so that is good. I’d take advantage of the agressive value prices is you want a good 4K tv that upscales well and is great so far! I’ll update if I have any issues.

1 year warranty like the major manufacturers (Hisense is offering 4 on theirs but not their Sharp brand). 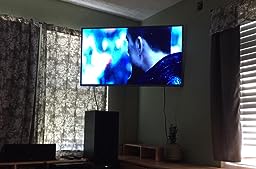 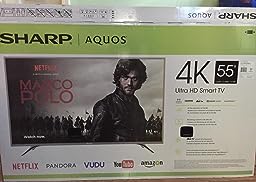